One of the stated goals of the 2040 General Plan is “support local and regional efforts in the Town’s response to climate change” (goal ENV-9). The State has set a target to reduce GHG emissions to 40 percent below 1990 levels by 2030 and 80 percent below 1990 levels by 2040. These targets are in line with the Town’s most recent Sustainability Plan. The question we have is how does the 2040 General Plan perform against these goals? We’re concerned about the Town’s efforts (or lack of) due to the fact that greenhouse gases are trapping heat in the lower atmosphere – aka, global warming.

The short answer is the 2040 General Plan is a GHG nightmare.  The fundamental problem is the 2040 GP is built on population and housing growth projections that are excessive and not supported by any State forecast. For example, under the 2040 GP the population is projected to grow from 28,810 people in 2008 to 41,250 in 2045 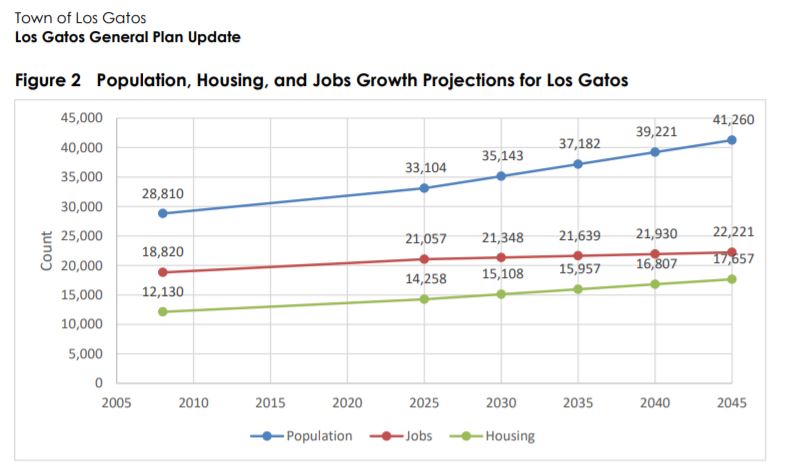 This is the ugly side of growth and results from no jobs being created in the Town coupled with a lack of public transportation. The Town of Los Gatos is underserved from a public transportation point of view. Essentially the 2040 GP plans for the development of new housing in Los Gatos, only to have the new residents get in their cars and drive to Palo Alto, Santa Clara, or San Jose where the jobs are being created.

Even after the GHG forecast is adjusted for expected reductions resulting from State regulations, including Advanced Clean Cars Program, California Energy Efficiency Standards for Residential Buildings, California Renewable Portfolio Standards, AND local actions taken by the Town, such as the switch to SVCE provided electricity, the “adjusted forecast” for GHG still exceeds the State goals in 2030 and 2040 by 71% in 2030 and 518% in 2040! The magnitude of the gap in 2040 between the projected “adjusted forecast” for GHG and the State’s GHG goal exceeds the total GHG generated from transportation based on the Los Gatos transportation model output. You could take every car off the road and still not achieve the State’s goal of 80% reduction in 2040. 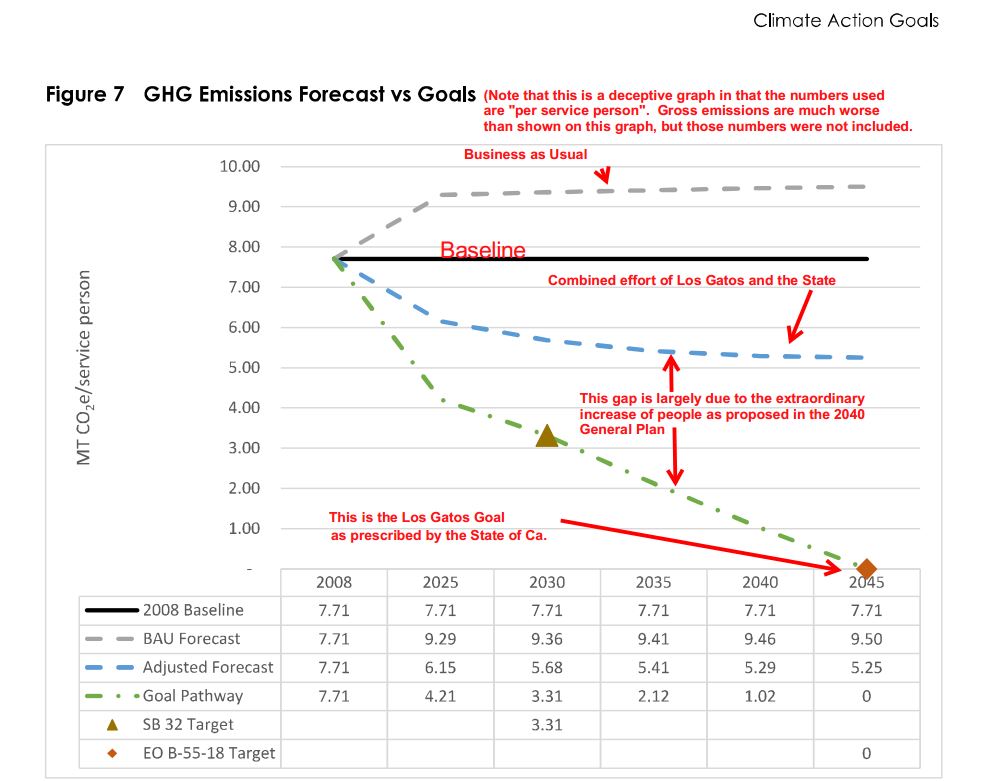 One last point that needs to be made is the 2040 GP does not include any serious Town policies or programs which are likely to reduce GHG emissions. Put another way, not only does the excessive population and housing projections lead to a massive increase in GHG under the “business as usual” scenario, the 2040 GP does not include any policies that will reduce the increase created by the plan. The DEIR says it very well on page 9 of the Greenhouse Gas Forecast Report – “other policies and programs beyond those listed here were not included in the adjusted forecast, as it is currently unclear to what extent the GHG emissions reductions from these policies and programs will actually be achieved and on what timeline”.

But there is an alternative – namely grow less and develop fewer houses. The DEIR studied the effect of moderate growth alternative and concluded that less overall development and associated growth would “reduce overall per capita GHG emissions….and ensure that the Town’s emissions reductions are on the trajectory to meet the State’s long-term emissions goals”.  The DEIR concluded that Alternative 2, which was the medium growth alternative, would “result in reduced GHG impacts and impacts would be less than significant”. Alternative 2 provided the number of houses closest to the ABAG’s 1993.

This section only looks at the Environmentally Superior plan and does not address low growth nor high growth alternatives that are also proposed in the 2040 General Plan.

Given this, it is hard to understand why the current draft of the 2040 GP is built on excessive growth projections that are not supported by any official population forecast, which in turn leads to an excessive amount of GHG being generated, and results in the Town unable to ever meet the State’s long-term goals. This can be all avoided by building a 2040 GP based on reasonable growth forecasts.

Our question for the Town will be, what is more important to us:  Growth? or the quality of life for our future generations?